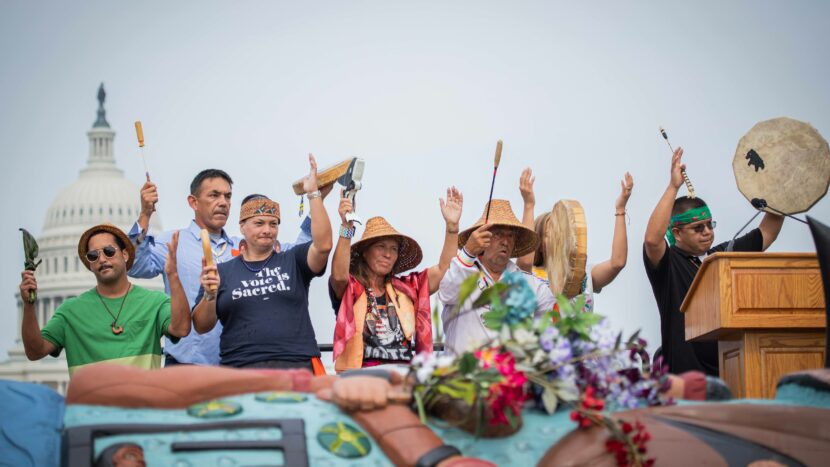 This year marks the first time the United State government has officially acknowledged today, October 11th, as Indigenous Peoples’ Day. It has been a long time coming.

Indigenous Peoples’ Day is not simply a day of remembrance–an occasion to acknowledge the violent process of colonization, dispossession, and plunder that came with Christopher Columbus’s arrival to the “New World.” It is also a day to celebrate the Indigenous Peoples of the Americas, who, despite centuries-long campaigns of termination and forced assimilation, are still here, continuing to affirm a way of living on and with the land, based not on profit or domination, but on principles of reciprocity, obligation, and intergenerational care.

While it is only recently that the campaign to rename Columbus Day has taken off across the country, Indigenous communities have been fighting against everything the holiday enshrines since 1492: colonization, settlement, property, extraction, and the erasure of Indigenous life. Indeed, there are dozens of current, high-stakes struggles that are taking on the legacy of Columbus in direct, inspiring, and powerful ways: from the movement to end the epidemic of missing and murdered Indigenous women and children, to struggles to remove dams and restore salmon in the Pacific Northwest, and to protect sacred places at-risk from mining and oil and gas development.

We urge you to celebrate Indigenous Peoples’ Day by supporting the work of Tribal Nations, Indigenous water protectors, and land defenders, who are bravely struggling for sovereignty, self-determination, and for a just and livable future for all.

In this post, we outline just a few ways you can honor, celebrate, and take action.

In the context of the climate and extinction crises, Indigenous communities are leading the worldwide movement to turn the tides against extraction. As a recent report by Indigenous Environmental Network and Oil Change International attests: “Indigenous resistance in North America has stopped or delayed greenhouse gas pollution equivalent to at least one-quarter of annual U.S. and Canadian emissions.”

Thousands of water protectors and land defenders are descending on Washington all this week to call on President Biden to uphold his promises to end the fossil fuel era.

Check out the People vs Fossil Fuels website to find an action near you, and consider lifting up this important work on social media.

This year’s Red Road to DC totem pole journey, which connected struggles to protect sacred sites across the country, ramped up a nation-wide campaign to protect sacred places at risk from extraction and industrial development, and to ensure Indigenous voices and representation lead in these important matters pertaining to Indigenous rights, religions, and ways of life.

With the ultimate goal of establishing ‘Free, Prior and Informed Consent’ as the foundational basis of federal relations with Indigenous Peoples, we stand behind the RESPECT Act, which calls on the federal government to meaningfully engage Tribal Nations and Indigenous peoples in decisions concerning tribal lands.

Take action: send an email to your reps urging them to support the RESPECT Act.

As a symbolic strike against the persisting legacy of colonialism on the continent, the campaign to rename Columbus Day as Indigenous Peoples’ Day is part of a broader movement to build new monuments and messages around a vision of the world that is incommensurate with the colonial world enshrined by the mythos of Christopher Columbus.

If your city or state is not yet celebrating Indigenous People’s Day, here are resources to join in the campaign to institute it.