In February of this year, the House of Tears Carvers of the Lummi Nation sourced a log from a 400 year-old Western Red Cedar tree. Over the past two months members of the House of Tears, aged 4 years old to 70, participated in the creation of the #RedRoadtoDC totem pole. In an artist’s statement, Master Carver Jewell James explained how each figure and symbol on the pole gives nod to specific Native American cosmologies and tribal connections that span beyond the Canadian and Mexican border.

The Symbols on the Pole

The pole includes Chinook salmon–at risk of extinction, a wolf, a bear, an eagle, and seven tears—a reference to seven generations of trauma passed on from colonialism. Additionally, the pole includes an image of a child in jail in reference to the U.S.-Mexico border issues and the bloodline relationship of immigrants seeking entry into a country where their family has historical ties and once occupied. “Those are our people over there,” James said.

“Working on totem poles opens up a path to the spirit. It is my hope that the pole will transmit that spirit to Washington D.C. and allow the Biden administration to follow through on their treaty obligations. Many of us believe that the United States owes it to us to listen. They entered into a sacred relationship with us, some people call it a treaty. But they use their voices to promise. To us, when you use your voice, it takes the sacred wind and the great spirit gives you the energy to talk, and your commitment is one of spiritual significance to Native Americans. We hope by bringing this totem pole to Washington, D.C., we’ll also awaken the sacred commitment the United States has to the Native American Nations.” 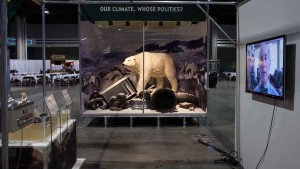 CNN coverage of the Red Road to DC